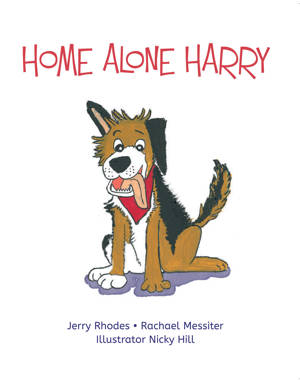 Posted on 9th November 2019 By Nicola

I’m so pleased to be reviewing this lovely children’s book today as part of the blog tour. My thanks to the Thunkies team for the review copy of the book and to Rachel Gilbey from Rachel’s Random Resources for the place on the tour.

Harry is a mischievous young dog, adored by his family, Dad and Mum, Maisie (8) and Max (5). When the family leave him on his own he creates chaos. Dad demands, “That bad dog must go!” Alone and sad in bed that evening, Max asks, “Can anyone help?” How will the Thunkies respond to his call?

Home Alone Harry is both entertaining and educational. Jerry Rhodes teaches ‘Effective Intelligence’ with the help of the cartoon characters, the Thunkies. There are four Thunkies and each has their own area of expertise and they use that to help with Harry’s situation.

When Harry the dog is left home alone by his family he goes into a panic. He’s worried about them, wondering when or even if they will return. Because of this he destroys the house. The family are understandably angry but the Thunkies help them to realise why Harry has behaved in this way and that they need to show him they are in control and that they will always return to him.

Rachael Messiter collaborated with Jerry Rhodes on this book. She’s an expert in dog behaviour and this is the first in the Thunkies Love Dogs series. Between them they have created an interesting and thought-provoking story for children (and for adults too) about the way dogs and humans think and how to deal with the barrier in understanding. This is a glossy book with wonderful illustrations which add to the insights in the story.

It’s a lovely read for children and adults but it’s also likely to be useful if you have a new dog around. I presume the other books in the series will look at similar issues. It’s certainly a unique and unusual idea for children’s books and one which works very well. Jerry Rhodes’ life-long research and teaching is the inspiration behind ‘Home Alone Harry’, this first book in a series for children featuring the cartoon characters, Thunkies®. After completing his degree and teacher training at Oxford University, Jerry’s career as a school-master was cut short by polio. He changed course to a management career in industry, discovered his talents for creativity, and formed his world-wide consultancy to collaborate with international organisations. A special project with Philips led to the discovery of ‘Thinking-Intentions’, to which he has now given the playful name, Thunkies®. Jerry writes his books from his weather-beaten old farmhouse in the Gloucestershire Cotswolds. Rachael Messiter, a Dog Listener, uses the approach known as Amichien® Bonding pioneered by Jan Fennell. Rachael has her own practice, Talking Paws, based in Staffordshire. Previously she lived with wolves for close on two years in Colorado, USA, to learn how packs work. She has identified a group of issues that dog owners experience that are due to the well-meaning but flawed behaviours of owners, rather than ‘nuisance’ dogs. How to properly avoid and resolve such troublesome issues will be the theme of each book in the series Thunkies® love Dogs. Nicky Hill is an illustrator and storyteller from Winterbourne near Bristol. Her artwork is featured throughout the Thunkies® Love Dogs books, bringing a bright, vibrant style that captures the imagination. A great lover of animals both wild and domestic, Nicky also illustrates and writes her own series of books about ‘The Wotton Pack’; a group of inquisitive pooches who spend their days and nights having many adventures. She currently lives with her own pack of three dogs in Wotton-under-Edge, a small town in Gloucestershire, where she also co-runs the shop called ‘The Collective’.