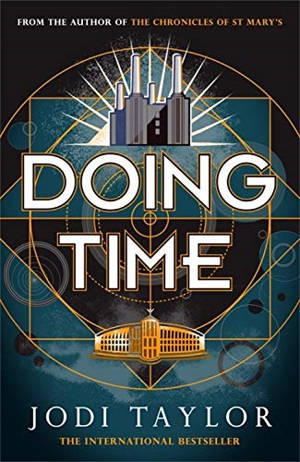 I’m very pleased to be reviewing Doing Time by Jodi Taylor today as part of the blog tour. My thanks to Anne Cater from Random Things Tours for the place on the tour and to Jennifer Harlow from Headline for the amazing limited edition proof copy of the book for review purposes.

I’ve read and enjoyed several of Jodi Taylor’s Chronicles of St Mary books so I jumped at the chance of reading Doing Time, a spin-off and the start of a brand new series.

This time the focus is on the Time Police. Whilst the St Mary’s books are all about historians jumping back in time to investigate historical events, the Time Police are employed to keep the timeline straight, to ensure that nothing messes up time. We are introduced at the beginning to three brand new recruits: Jane, Luke and Matthew. Each has their own reason for being in the Time Police and to be honest they’re a fairly haphazard bunch, but as the story progresses they start to work together, become friends and there’s hope for them yet!

Taylor’s books are always great fun and Doing Time is no exception to that. Inevitably the recruits find themselves in all kinds of situations, some that are part of their job and others that are rather more of their own making. Either way, I found myself smiling and sniggering a fair amount.

It was nice to see some of the St Mary’s characters making guest appearances, particularly the legendary Max. Whilst this book is very much the start of something new, there are so many links with St Mary’s that I’m glad Taylor managed to weave the two together. There was lots to keep me guessing in this book, lots of mysteries to be solved. I enjoyed the fact that there was a jump to relatively recent times as well as very far back in history as it made for a nice mixture.

Apparently this is a book for fans of Dr Who and Jasper Fforde. What a combination! I think it’s pretty accurate, it has the humour, it has the travelling through time, it has the relationships being formed. It’s a very engaging read, light-hearted yet still meaty, an enjoyable romp through time! Jodi Taylor is the internationally bestselling author of the Chronicles of St Mary’s series, the story of a bunch of disaster-prone individuals who investigate major historical events in contemporary time. Do NOT call it time travel!

Born in Bristol and now living in Gloucester (facts both cities vigorously deny), she spent many years with her head somewhere else, much to the dismay of family, teachers and employers, before finally deciding to put all that daydreaming to good use and write a novel. Nearly twenty books later, she still has no idea what she wants to do when she grows up.