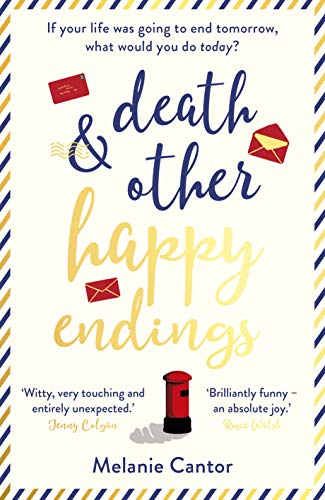 I’m delighted to be reviewing Death and Other Happy Endings by Melanie Cantor today. Just look at that beautiful cover. My thanks to Anne Cater from Random Things Tours for the place on the tour and to the publishers, Bantam Press, for the gorgeous copy of the book for review purposes.

What would you do if you had three months to live? That’s the question that faces Jennifer Cole right at the beginning of Death and Other Happy Endings. I must admit I baulked at this a bit when I read that Jennifer is the same age as me……! She decides to write three letters, giving a fair account of her grievances towards three people: her ex-husband, Andy; her sister, Isabelle; and her ex-boyfriend, Harry. I got the distinct impression that Jennifer had let things go many times in her life, and this was her chance to finally say what she wanted to. When you’re coming to the end of your life you can do that, right?

In the early stages of this book I honestly didn’t know whether to laugh or cry so I did a bit of both. Obviously, Jennifer’s situation is pretty horrendous but there’s such wit in the writing that I had a good giggle too. Oh, and Jennifer does something totally out of character that was written so well and that I really loved her for doing. Attagirl!

I had this idea that the story would go one way or the other and I wasn’t wrong, but I can’t tell you anything more about it otherwise it would be a spoiler. What I can say is that I thought this was such a fantastic read. For a book about a terminal illness it’s surprisingly uplifting and I raced through it within a day.

It’s a story of friendships, relationships, putting right wrongs and dealing with life’s blows. Sometimes I wanted to shake Jennifer for being a doormat but most of the time I really liked her and I thought she was very brave. The supporting characters are great too. She has some good friends and her bad news helps her to change her relationship with one or two people who weren’t so good for her.

This is a lovely book, one which I enjoyed immensely, and it’s a brilliant debut from Melanie Cantor. It’s hard to say anything else without giving anything away so I’ll stop here and just tell you to get a copy as it’s fabulous. Melanie Cantor was a celebrity agent and publicist for over thirty years. Her clients included Ulrika Jonsson, Melinda Messenger and Melanie Sykes.

In 2004, she hosted a makeover show on Channel 4 called Making Space and in 2017 having just turned 60 she was scouted on Kings Cross station, subsequently appearing as a ‘real model’ in the most recent Dove campaign.

She turned her hand to writing in 2008. Death and other Happy Endings is her first published novel.