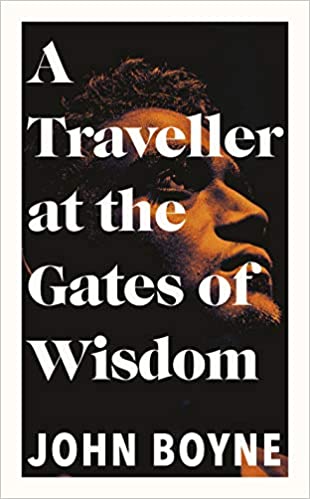 I am over the moon to be sharing my review of A Traveller at the Gates of Wisdom by John Boyne today. I’m a huge fan of this author. My thanks to Patsy Irwin from Doubleday for sending me a proof copy of the book for review purposes. It’s published in hardcover and ebook tomorrow.

Some stories are universal. They play out across human history. And time is the river which will flow through them.

It starts with a family, a family which will mutate. For now, it is a father, mother and two sons. One with his father’s violence in his blood. One who lives his mother’s artistry. One leaves. One stays. They will be joined by others whose deeds will change their fate. It is a beginning.

Their stories will intertwine and evolve over the course of two thousand years – they will meet again and again at different times and in different places. From distant Palestine at the dawn of the first millennium to a life amongst the stars in the third. While the world will change around them, their destinies will remain the same. It must play out as foretold. It is written.

A Traveller at the Gates of Wisdom is the extraordinary new novel from acclaimed writer John Boyne. Ambitious, far-reaching and mythic, it introduces a group of characters whose lives we will come to know and will follow through time and space until they reach their natural conclusion. I’m a huge fan of John Boyne’s writing. I’ve never read anything of his that hasn’t wowed me. I admit to being nervous about A Traveller at the Gates of Wisdom though, and must confess that if it hadn’t been written by Boyne I would probably never have picked it up. What a travesty that would have been. This is an epic journey through history, the like of which I have never come across before.

We begin with our unnamed narrator in 1AD. As his mother is in labour with him, his father is out slaughtering a dozen boys under the age of 2. We then move through the next 2000 years, each chapter being set in a different part of the world. The narrator is not exactly the same man (that would make him impossibly old) but it’s basically the same set of circumstances – a father, a mother, two sons, and as time moves on one of those sons grows up and has his own life experiences.

It’s so hard to explain it adequately but this is basically a high concept story that cleverly portrays how the cycle of life never changes and whilst things around us change, the human race essentially stays the same, living out the same emotions, the same events, the same circle of life.

The things that surround us may change, but our emotions will always remain the same. A man who lost his beloved wife a thousand years ago suffered the same grief that I felt when I lost mine, no more and no less.

I enjoyed the little historical placeholders, events that I recognised, just as much as I enjoyed the ones I didn’t. And I particularly loved the epilogue which takes place in the future and which has a rather unexpected and amusing end for somebody.

This is an incredibly bold and clever novel from the versatile pen of John Boyne. It sweeps across the continents, taking the reader travelling through time to remind us that we are just a tiny cog in the wheels of life. It’s epic in every sense of the word.

John Boyne was born in Ireland in 1971. The winner of three Irish Book Awards, he is the author of eleven novels for adults, five for younger readers and a collection of short stories. The international bestseller The Boy in the Striped Pyjamas was made into a Miramax feature film and has sold more than six million copies worldwide. His novels are published in over fifty languages. He lives in Dublin.