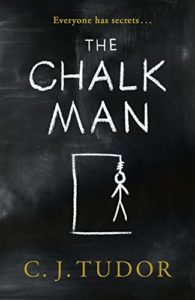 I’m absolutely thrilled to be reviewing The Chalk Man by C.J. Tudor today as part of the blog tour. This is a book that’s receiving a lot of hype and I’m happy to report that it’s all very well-deserved. Thank you to Jenny Platt from Penguin Random House for asking me to be on the tour and to Gaby Young who sent me a copy of the book.

Here’s what it’s about:

None of us ever agreed on the exact beginning.

Was it when we started drawing the chalk figures, or when they started to appear on their own?

Was it the terrible accident?

Or when they found the first body?

The Chalk Man is one of those books. You know, you keep seeing them everywhere, everybody is raving about them, there’s a lot of hype surrounding them. Mostly, that hype is well-deserved and The Chalk Man is firmly in that category. I absolutely loved it.

The story is very much Eddie’s. He’s 12 in 1986 and 42 in 2016 and the story is told in alternate chapters set in each different time. Something about the 80s sections seemed so 80s-ish without it being signposted in a really obvious way. It’s probably because I was almost the same age as Eddie and his friends in 1986 so it was easy to put myself there.

1986 is the year that one of his friends receives a load of chalk for his birthday and they start using it to leave each other messages. But the innocence of this soon gets lost amongst some sinister events that take place. In 2016, Eddie is looking back on past events, his memories jogged by the reappearance of an old friend.

This is a perfectly plotted story. Going backwards and forwards between the two years provides the ideal device for cliffhangers, leaving me desperate to find out what happened next.  The lives of the children come across so well, the long summers riding around on a bike, eating penny sweets, hanging out with friends.

This book didn’t exactly scare me, but it certainly invaded my dreams and I had some very odd night-time experiences. It has eerie bits, segments in the woods, the idea of being watched. The scary part about it is what the mind is capable of conjuring up.

This is such a brilliantly written book, an addictive read. I loved it and can’t wait to see what this debut author comes up with next. C. J. Tudor was born in Salisbury and grew up in Nottingham, where she still lives with her partner and young daughter. Her love of writing, especially the dark and macabre, started young. When her peers were reading Judy Blume, she was devouring Stephen King and James Herbert.

Over the years she has had a variety of jobs, including trainee reporter, waitress, radio scriptwriter, shop assistant, voiceover artist, television presenter, copywriter and now author. The Chalk Man is her first novel.