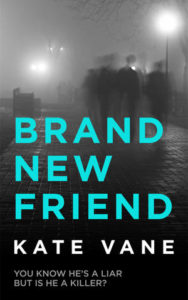 I was delighted when Kate Vane got in touch to ask me to be a part of her blog tour for her latest book, Brand New Friend. Her last book, The Former Chief Executive, appealed to me very much and is currently on my TBR pile. Brand New Friend appeals enormously too and I wish I could have fitted in a read of it, but instead Kate has kindly written a guest post about why she’s come back to the crime genre.

BBC foreign correspondent Paolo Bennett is exiled to a London desk – and the Breakfast sofa – when he gets a call from Mark, a friend from university in eighties Leeds. Paolo knew Mark as a dedicated animal rights activist but now a news blog has exposed him as an undercover police officer. Then Mark’s former police handler is murdered.

Paolo was never a committed campaigner. He was more interested in women, bands and dreaming of a life abroad. Now he wonders if Mark’s exposure and his handler’s murder might be linked to an unexplained death on campus back when they were friends. What did he miss?

Paolo wants the truth – and the story. He chases up new leads and old friends. From benefit gigs and peace protests, to Whatsapp groups and mocktail bars, the world has changed, but Mark still seems the same.

Is Mark the spy who never went back – who liked his undercover life better than his own? Or is he lying now? Is Paolo’s friend a murderer?

Why I’m coming home to crime by Kate Vane

Do you only read one genre? I don’t. I read all kinds of books and so I felt that I should also be able to write in more than one genre. Conventional wisdom is that this is not a good idea, but I tend to kick against conventional wisdom.

The authors who inspired me when I first started writing were mostly crime writers. Ruth Rendell was a massive influence and was the model for the kinds of books I wanted to write – stories based on deep, dark explorations of character more than puzzles or contrived twists. James Ellroy was an author I loved but could never hope to emulate. He also goes deep into the darkness of the psyche but while Rendell’s stories are confined, domestic, the disturbing disguised by the banal, his vision of LA is almost operatic with its violence and corruption. I loved the gorgeous prose of Raymond Chandler and the pared-down wit of Elmore Leonard. Val McDermid and Denise Mina combined deep characterisation with the dynamics of the team in their police procedurals.

In the last few years though, I fell a little out of love with crime. I was reading less and my writing mind was restless too. I still read a few favourite authors but browsing the popular titles, nothing jumped out for me. There was a trend towards more high-concept, plot-driven thrillers which didn’t appeal to me in the same way.

I also became curious about what it is that makes us keep turning the pages in literary fiction. A while ago I was reading two books at the same time – an action thriller and Barbara Pym’s Some Tame Gazelle. In the action thriller the protagonist was facing the threat of death by torture. In Some Tame Gazelle, happily unmarried Belinda was wondering whether the archdeacon would come to tea. I found I cared more about the latter. How did Pym do that? Such questions made me want to write a literary novel, to see if I could tell a story without the scaffolding of a crime plot.

However, I’ve returned to my first love. In part it’s because I’ve turned away from trends and found authors who write the kind of crime fiction I like. Authors such as Mick Herron, Harry Bingham, and Attica Locke write novels with nuanced characters, stylish prose, and complex themes, who have something to say about relationships and power and wider society. These authors combine the best of literary and crime fiction and are my current role models. I love that immersive feeling when the plot of a crime novel propels the story forward, leaving the ideas and themes free to insinuate themselves into your mind.

Interestingly, none of these are new writers, although they’re authors I’ve only discovered in the past year. It takes time to get this good. In traditional publishing there is a big infatuation with the new, a long line of hopefuls who really will never get a second chance to make a first impression. Scour the new releases and you will find lots of first novelists, a few veterans who’ve been writing for twenty plus years, and not much in between. Reviewing ARCs can sometimes feel like going on a succession of first dates, while I prefer more of a committed relationship.

So, I’m sticking with crime. It makes more sense for readers. If someone has enjoyed one of your books, they want to be able to pick up the next one and get more of what they liked. It means I can focus on learning and growing in my favourite genre. Now, belatedly, the conventional wisdom makes sense to me too.

Thanks for such a great post, Kate. I like a variety of different kinds of books too and don’t see why authors can’t write in different genres. I hope you are enjoying being back with crime. She has written for BBC drama Doctors and has had short stories and articles published in various publications and anthologies, including Mslexia and Scotland on Sunday.

She lived in Leeds for a number of years where she worked as a probation officer. She now lives on the Devon coast.